Zero (零点 Reiten) is a ninja-esque human combatant in Anarchy Reigns. Zero is a human ninja that wields twin katanas - Onimaru and Juzumaru - a pair of authentic japanese blades built for the wielder to carry on their back. The swords are rumored to be part of the "Tenka Goken" blades of myth.

He made his appearance in the campaign in Hong Long to challenge Jack to a fight in order to collect data from him. After the fight and collecting enough data, he escaped and used this data for his new weapon. Zero came back in Bari Shur with several Gargoyles and his new weapon, Cthulhu, with orders to kill Jack. After Jack destroyed the Cthulhu with the help of Big Bull and Rin Rin, Zero ambushed Jack from behind with his energy kunai right before their battle. Zero lost the fight, remarking that Jack's "super friends" were not a part of his calculations. Jack asked him who gave him the orders to kill him, but instead of giving an answer Zero self-destructed after saying his last words, "I am ashamed."

"This enigmatic swordsman is a master of dual-wielding katana ana a skilled practitioner of Zero-Style Ninjutsu, a discipline employing beam kunai. He dons a pitch-black, nanomachine-equipped suit to maximize his physical potential for grueling infiltration missions.

He has but one goal: to harvest the data needed for developing the drone army's latest weaponry. He is prepared to mow down hordes of twisted mutants and combat-enhanced cyborgs to achieve it.

His code name is Zero; in dark alleys, it is whispered that he may be descended from a clan of ancient warriors once known as ninjas." - In game profile.

Zero cares about his honour, and doesn't even say who gave him the orders to kill Jack, with him self-destructing instead. He is also very aloof, preferring to work alone.

Zero's background is shrouded in mystery. It is speculated that he is the descendant of an ancient ninja clan.

Zero is exceptionally skilled with close range weapons, mainly his twin katanas, and relies heavily on speed and agility. He is also extremely stealthy, preferring tactical ambushed and attacking enemies from behind. 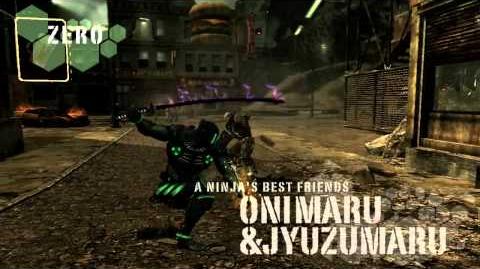 Zero in the campaign

Final Design
Add a photo to this gallery
Retrieved from "https://anarchyreigns.fandom.com/wiki/Zero?oldid=6352"
Community content is available under CC-BY-SA unless otherwise noted.