Sasha (サシャ) is a woman of icy intelligence, fast-tracked into the Milvallen Ministry of Justice's Bureau of Public Safety despite her youth. After a mere two years on the force, she joined the High Crimes Division and was later scouted by the elite Strike One detachment.

Remarkably multi-talented, Sasha serves the Bureau with both brilliant analytic skills and mastery of BPS combat techniques. When armed with her Snow Spikes and the latest BPS nanomachine-equipped suit, Sasha's combat potential can surpass even cyborgs and mutants.

Sasha is part of the Strike One detachment. Along with Leo and Nikolai she is tasked to kill Maximillian Caxton, the former leader of Strike one. She had previously worked under Max along with Nikolai and Leo as he was their mentor, until his wife was murdered by someone using Cybrid arts - believed to be Max himself. Like Leo, she wants to capture him alive in order to help him though his mental instability.

"Seems like Max has changed his look. Not for the better..." - Sasha regarding the footage of Max

Part of the Strike One detachment, Sasha arrives in Altambra along with Leo and Nikolai in order to locate Maximillion Caxton. Entering the Altambra club Asylum, Sasha checks the security log and discovers Max was at the club although has changed his appearance. She sends Nikolai the data and the trio leave to track down Max. Sasha and Nikolai separate from Leo and let him deal with the Killseekers.

Later Leo faces off against Druga and Garuda in order to find out what they know about Max. During the fight, Sasha arrives to provide backup. She and Leo defeat Druga and Garuda but are unable to acquire any information about Max. Nikolai contacts them and tells them Max is damaged and needs repairs, to which Sasha notes there is a military port nearby, decommissioned but still functional.

"You're not going to believe this but there is no sign of him anywhere..." Sasha to Leo regarding Max

Arriving in Port Valenda, the team search for Max. Sasha informs them that there is no sign of him anywhere. Nikolai confronts Leo about his bond with Max, calling him a liability as he doesn’t believe Leo would be able to kill Max due to their bond. Sasha tries to reassure Leo, and they separate.

They reconvene at the harbor and Sasha informs Leo that Max is in the area but they don’t have much else to go on. Suddenly the trio are ambushed by a Kraken, and Sasha works with Leo and Nikolai to take it down. Leo distracts the Kraken and Sasha activates an escavator which bisects the Kraken. The three split up again and continue the search for Max.

"You're popular with the ladies, aren't you Leo?" - Sasha to Leo while facing Ai Rin and Fei Rin

Sasha arrives in time to help Leo face off against two sisters, Ai Rin and Fei Rin, members of the Clan of the Crimson Dragon that have put a price on Leo’s head. Sasha and Leo fight the sisters and manage to best them. Sasha commands them to go and Fei Rin grabs Ai Rin and they retreat. Leo tells Sasha he thinks Max is close and they continue to look for him.

Leo finally manages to find Max but discovers Max is suffering from a multipersonality disorder, with his alter-ego being a psychotic and wrathful individual. He fights Leo and part way though the fight, Sasha and Nikolai arrive to support Leo and capture Max. Sasha uses her snow spikes to slow him down and Nikolai attempts to kill him, but is stopped by Leo. As Leo prevents Nikolai from chasing after Max, Sasha is ordered to follow Max.

"Apologies, you two play by yourselves…" - Sasha leaving the Baron and Mathilda.

Strike One arrives in Bari Shur and again the three split in order to track Max. Sasha intercepts Jack, Mathilda and the Baron as an attempt to stop them interfering with Max’s retrieval. She notes that Jack has an impressive record as a Chaser, but wonders if all the people he captured were completely guilty. It’s clear she is having doubts about Max’s guilt and Jack tells her corruption starts at the top and is a death sentence to them all. During their exchange Sasha hits a sore spot with the Baron and he challenges her. She faces off against the Baron and Mathilda as Jack leaves to find Max.

During the fight, a tornado blows though the stage and the Baron warns Mathilda. Sasha remarks that surely it’s the Baron who needs watching and Mathilda agrees, much to the Baron’s chagrin. Sasha bests the pair and leaves to reconvene with Leo.

Much later Leo faces off with Nikolai, not willing to kill Max for his crimes when he clearly needs help. Defeating Nikolai, Leo is contacted by Sasha. Leo wants her to stay true to HQ’s orders but she argues that she owes Max as much as he does. She wants to help Max too and tells Leo to get to her position quickly.

Leo finds Max who has been defeated by Jack and tries to talk Jack round but to no avail. Jack attempts to finish off Leo but Sasha saves him, using her snow spikes to deflect Jack’s attack. Enraged, Jack attempts to kill her but is stopped by Leo, who desperately tries to convince Jack to stop his manhunt on Max. However, their fight is interrupted by Nikolai leading a huge force of BPS drones in order to kill everyone involved. Sasha fights against Nikolai’s forces along with Leo, Jack, Baron and Mathilda. After defeating numerous drones, Nikolai manages to knock out Mathilda and Baron and avoids Sasha’s ice spikes and knocks her down too.

Upon defeating Nikolai, Leo runs to Sasha’s side to help her up. She is relived to see he is still alive. The two help Max and make plans to set the record straight concerning Nikolai.

"Sasha Ivanoff is a woman of icy intelligence, fast-tracked into the Milvallen Ministry of Justice's Bureau of Public Safety despite her youth. After a mere two years on the force, she joined the High Crimes Division and was later scouted by the elite Strike One detachment.

Remarkably multi-talented, Sasha serves the Bureau with both brilliant analytical skills and mastery of BPS combat techniques. When armed with her Snow Spikes and the latest BPS nanomachine-equipped suit, Sasha's combat potential can surpass even cyborgs and mutants." - In game profile.

Normally cold and analytical towards other people, Sasha shows her emotions when it comes to her team. Usually annoyance with Nikolai. She seems to have a sense of overprotectiveness towards Leo shown through her defending him from Jack Cayman and standing between him and Leo even when she was about to be cut in half. This could be a possible sign that she has feelings for him.

Quick and relentless, Sasha employs a barrage of light but speedy strikes and kicks. Her KW moves can be considered projectiles as she does not attack with any weapon attached to her. Her KW-L extends into a maximum four-hit combo finishing with a powerful downward spike. Her KW-H is an immolating forward mass of ice.

Her 360 degree attack has a very long start-up time- when coupled with Spin Master she is very able to wear down Rampaging opponents. Her Reverse Approach grab is MadWorld brutal, seeing her handstand above her opponent's shoulders and drop her array of Ice Spikes like a guillotine on the opponents head.

Unfortunately Sasha is very much a 'Glass Cannon', able to dish out punishment in spades but rather unable to take it. She makes up for this by having a very good KW gauge charge rate. 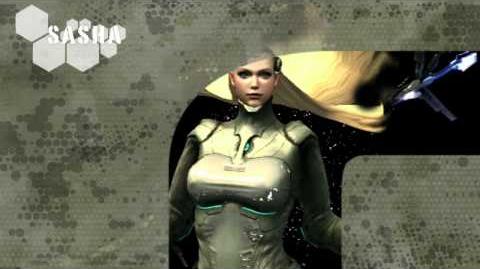 Sasha in the campaign

Final Design
Add a photo to this gallery
Retrieved from "https://anarchyreigns.fandom.com/wiki/Sasha_Ivanoff?oldid=6354"
Community content is available under CC-BY-SA unless otherwise noted.