"Fan her flames of battle and you'll be some dead guy..." - Tagline

Rin Rin (りんりん) first appeared in Mad World as a boss opponent. She is a part of a clan called the Crimson Dragon which is supposedly a clan of assassins, but it is never elaborated on. When you first encounter her in Jack's campaign, she claims that the Crimson Dragon has ordered him dead and she is honor-bound to see it done. She uses twin fiery blade-fans, christened Yanlong, to slice and ignite her foes. She is the middle sister of Fei Rin and Ai Rin.

Rin Rin appears during the Black Side story and is not seen with her sisters who were both present during the White Side story. She first meets Jack during his search for Max in Hong Long after separating from Leo and Sasha. Rin Rin descends from the Hong Long tower and confronts Jack who doesn't take her as much, after a brief conversation she reveals that the Crimson Dragon Clan wants Jack dead. Jack dismisses the notion of fighting her but she was adamant about seeing him dead under orders of the clan.

After a brief fight Jack manages to defeat Rin Rin. After their fight she is surprised to see that Jack has spared her life and even questions his reasons, Jack's response being "I'm looking for someone else" before telling her that he doesn't kill everyone he meets. Grateful for Jack sparing her life she thanks him before he goes off to continue his search.

Later on she appears alongside Big Bull in Bari Shur when Jack is confronted by Zero and Cthulu. Rin Rin informs Jack that she came to repay her debt for the attack in Hong Long while Bull came to help out his "brother". Seeing the two Jack accepts their help and together the three of them take on Cthulu.

After a long battle the trio managed to emerge victorious however Rin Rin and Bull have been weakened from their fight as Zero appeared leaving Jack to face Zero alone. After the confrontation Zero, seemingly, commits suicide leaving Jack to meet with Baron, Mathilda, Leo and Sasha for the final showdown with Max in the coliseum.

Rin Rin does not appear after she, Bull and Jack defeat Cthulu and Zero. Most likely due to the duo being injured and weakened from their previous fight.

"Rin Rin is the middle sister in a trio of sibling assassins trained since infancy. True professional in the art of death, they are considered the deadliest in their clan.

Every inch a hardened killer, Rin Rin is nonetheless well-mannered and reliable, assuming the leadership role among her sisters (though some less charitable may use the term "babysitter").

Rin RIn employs ancient assassination techniques passed down through her clan's long history and dons a reactor-powered, nanomachine-equipped suit to boost her physical ability. She fights with a pair of transformable fans known as Yanlong, or "Fire Dragons." - In game profile.

Rin Rin appears to deeply value honor, as she was honor bound to kill Jack and later to help him. 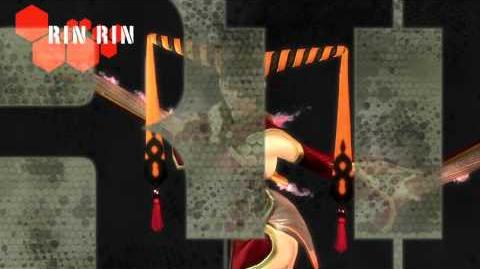 Rin Rin in the campaign

Jack leaving Rin Rin to continue his search for Max

Add a photo to this gallery
Retrieved from "https://anarchyreigns.fandom.com/wiki/Rin_Rin?oldid=6399"
Community content is available under CC-BY-SA unless otherwise noted.