"Get shocked by this battle of the currents!" - Tagline

Nikolai Dmitri Bulygin (ニコライ) is the new leader of Strike One of the BPS, after the former leader and mentor, Max, went berserk. He is also the final boss of Anarchy Reigns.

His job in his mind is simple, dispense justice, through any means necessary. When tasked with the job of finding Max, he was more than happy to accept the task, unlike Leo and Sasha. He believes only few individuals can change the world for the better and considers himself to be one of them.

During his training days, he developed a jealous mood and hatred of Max, simply due to the fact that Max was able to outshine him in every single way despite his best efforts. Although knowing this was his mentor and had years upon years of experience, he believed he was still better and one of the chosen and that Max was just in the way of his own development. However, he kept these feelings to himself, following orders loyally. Unlike Leo and Sasha whom got on well with Max.

When Max's wife died, and Max begun changing, Nikolai enjoyed every moment of it. He was looked upon by the higher-ups in the BPS due to no Max to shadow him. It is believed that Nikolai himself actually murdered Max's wife to throw him off, but there was no evidence to prove such a thing.

Now in place of Max, gaining command of an entire group of BPS including the squad he trained in. He begun instantly to fold it into his own will, while Leo and Sasha were unaware of his control over the drones that had been assigned to the area.

Later on, when Leo openly begun to challenge the BPS' order of killing Max, Nikolai instantly took this as a chance to shake off another thorn at his side, since they both had been arguing many times now over the orders. Nikolai lost the fight badly but was able to keep himself alive from Leo's attacks by using his own Tesla Blitz's power putting it into his body, which in turn allowed him to keep his embrace with death at bay. This also alerted the BPS of the attack due to Nikolai's signal fading and Leo's complete disconnection from them. The BPS then retrieved him shortly.

Nikolai's damage was worse than originally anticipated and the BPS now discovered that Sasha had also left them, joining with Leo. With two rogue operatives and one former one in the area, the BPS equipped Nikolai with an even more powerful body, with the hopes that it would be more than enough to handle all oppositions. For the most part it did, being able to easily knock out Sasha, Mathilda, and Baron. However Nikolai once again fell short during the fight and was sliced in half by Jack Cayman.

With Nikolai's real intentions and beliefs in the remains of his surviving cortex memory located in his eye, Leo brought back Nikolai to the BPS, who was charged with usurping the company, which was done by Nikolai's drones much earlier on. It is unknown on the verdict, if Nikolai was built back after the events or if his memory was locked in somewhere.

"Nikolai Dmitri Bulygin, 32, is a former special ops operator and now a captain in the Bureau of Public Safety High Crimes Division under the Milvallen Ministry of Justice. He recently took command of the elite Strike One detachment, a team including Sasha and Leo.

The rule of lar is paramount to this career enforcer; Nikolai dispenses great justice to those he deems to be criminals.

Equipped with a cutting-edge pair of cybernetic arms powered by current that flows from the reactor on his back, the tremendous voltage generated allows Nikolai to unleash devestating electrical blows. He has no known next of kin." - In game profile.

"Your smile will not last long..." Selecting Nikolai 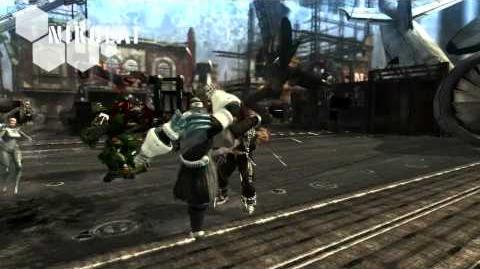 Final Design - Upgraded Form (Back)
Add a photo to this gallery
Retrieved from "https://anarchyreigns.fandom.com/wiki/Nikolai_Dmitri_Bulygin?oldid=6314"
Community content is available under CC-BY-SA unless otherwise noted.