Mathilda (マティルダ) is a character in Anarchy Reigns and MadWorld, in Anarchy Reigns she appears as Baron's personal assistant. Her Killer Weapon; Iron Maiden is actually a collapsible whip that transforms into a giant spiked bat. While dormant, it serves as a decoration on her suit, almost like a stylish belt. She is one of a few recurring character from MadWorld along with Jack Cayman.

“Careful, yo! Something’s comin’ down on us!”  - Mathilda warning Jack and Baron of the incoming Cargo Plane.

Mathilda first appears in the 3rd mission in Altambra,Your Favourite Pimp’s Pimp, On the Black Side.

She and The Blacker Baron appear to be hunting a lone Killseeker until they cross paths with Jack. Mathilda stops the Killseeker fleeing as Jack and Baron exchange words. Jack makes a remark regarding the origin of The Baron’s Pyro Gloves which makes Mathilda giggle, much to Baron’s annoyance. Jack then propositions Mathilda, noting she is a good chaser and could be a part of his team. She finds this amusing although Baron is far from impressed and he and Jack fight. She watches from afar as the two have it out. Towards the end of the fight, Mathilda notices a falling Cargo Plane and warns the pair.

“I don’t need no damn tentacle! … Hahaha!” – The Baron and Mathilda.

Later in Port Valenda, Jack meets Mathilda and Baron again and they are ambushed by a Kraken. The three take it on by throwing rocks at its weak points. Part way through the fight, Mathilda and Baron head to a giant industrial saw as Jack takes on and beats the Kraken. Mathilda finishes it off by activating the saw and slicing the Kraken in two.

“Ninja Zero. He’s worth 8000 dinar Daddy.” – Mathilda informing The Baron of the bounty on Zero.

The Baron and Mathilda later meet up with Jack again in Hong Long, only to be ambushed by Zero and a group of Ninja Drones. Mathilda receives Intel and tells Baron Zero is worth 8000 dinar. The three fight Zero and manage to best him, although he escapes. Later Amala asks Baron and Mathilda to assist Jack in capturing Max, to which Baron reluctantly accepts. They find Jack and offer their help, but he doesn’t seem interested. Mathilda motions to Baron to not to push him. Amala convinces Jack to work with them and the three confront Max. Jack informs them that they need him alive or Jeannie, Max’s daughter won’t pay. Max appears and the three fight him, managing to best him after a gruelling fight. Jack takes this chance to try and kill Max but is stopped by Baron. During the commotion, Max grabs Mathilda and holds her in the air to Baron’s frustration. Max throws Mathilda at him and he catches her safely. The three then head to Bari Shur in pursuit of Max.

“Why your lovely assistant chooses to associate with a man who clearly lacks the ability to satisfy her is a mystery to me I confess.” - Sasha regarding Mathilda and The Baron’s relationship.

Mathilda, Baron and Jack head to a spot where Amala lost track of Max. Amala notes Nikolai and Leo were in the area sometime before, chatting with Sasha remotely. Her info seems correct as Sasha appears and confronts the trio. She makes an offhand remark regarding Baron’s lack of ability to satisfy Mathilda, to which Mathilda and Jack find funny. Baron then challenges Sasha as Jack heads off to find Max.

The Baron claims the fight will be over in 30 seconds which seems to annoy both Sasha and Mathilda. During the fight, Baron warns Mathilda to watch out for the oncoming tornado. Sasha finds this amusing, saying to Mathilda she thought he was the one who needed to be watched. Mathilda agrees much to The Baron’s dismay.

Although they best Sasha, she manages to knock Baron back and daze him. She pursues him but is stopped by Mathilda. The two face off and Mathilda almost bests her with her Iron Maiden, but Sasha gains the upper hand and knocks her down. Sasha then retreats and leaves Mathilda and Baron.

Sometime later, Baron and Mathilda are contacted by Amala who has been trying to reach Jack unsuccessfully. She urges them to find Jack and Baron reluctantly agrees, with him and Mathilda heading to Jack’s position.

Mathilda and Baron arrive during a solar eclipse, just in time to see Sasha save Leo from Jack. They stand back and watch him face off against Leo until they are all ambushed by an enhanced Nikolai and many BPS drones. Jack, Leo, Mathilda, Baron and Sasha work together and fight off the drones and Nikolai. After destroying many drones, Nikolai becomes enraged and attacks. He faces off against Mathilda head on and easily smashes her aside. He also bests Baron and Sasha, leaving only Jack and Leo. They manage to defeat him with Jack slicing him to pieces with his chainsaw. In the aftermath, Jack heads over to the downed Mathilda and checks on her. Amala notes although Mathilda will need a tune up, her neural circuitry is all in place. Baron rushes over and holds Mathilda, happy that she is in one piece. Jack notes that he owes the both of them.

Mathilda appears in Valenda’s Free Mission 3, Mutant Suppression alongside The Baron to assist Jack against a horde of Mutants.

"Mathilda is always seen with her partner, the bounty hunter Blacker Baron, and never leaves his side. She possesses strength that belies her svelte appearance, as almost her entire body has been replaced with her cybernetic enhancements. Mathilda's background is shrouded in mystery, as she is famously a woman of few words. Of course, she hardly has to tell people she likes it rough: the fact oozes out of her every (remaining) pore." - In game profile.

Mathilda is both flirtatious and brutal, with little mercy. She says very little in game and usually communicates by laughing. She's incredibly loyal to her partner in crime, The Blacker Baron although likes to tease him often. She clearly enjoys her work and can often be heard giggling and laughing during hectic fights.

Jack regards her as a good chaser, even offering her a role alongside him. Sasha identifies her as The Baron's "lovely assistant" and seems to think she is the more competent of the pair.

Unlike Sasha, Mathilda has few qualms about getting right into the fight, her moves are full and acrobatic as opposed to quick and light. However, like Sasha, she has a three hit H-H-H combo perfect for guard testing and quick damage output. Her KW-L is a four-hit combo. Her Lunging Attack has a very good range making it useful against low range characters. Her Killer Weapon dishes out large amount of damage. 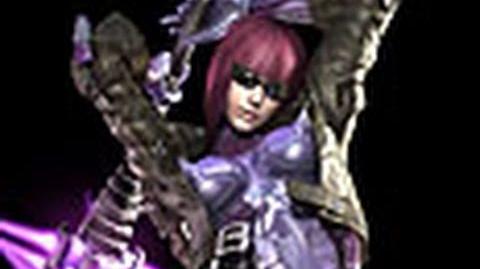 Final Design
Add a photo to this gallery
Retrieved from "https://anarchyreigns.fandom.com/wiki/Mathilda?oldid=6312"
Community content is available under CC-BY-SA unless otherwise noted.