Leo (レオ) uses a charged four positron blades to slice and dice his foes. Each blade juts out of his cyborg arms or legs. He is the main character of the White Side of the Campaign.

In the story, Leo and the two other members of the Bureau's Strike One Unit arrived at a bar in Altambra as they were on the hunt for their former leader, Maximillion Caxton. The current leader, Nikolai, asked the robotic bar tender if he met a man named Max. The bar-bot made a gesture that said that he didn't know and Nikolai thought he was lying and threatened him to tell what he knew about Max.

However, a stranger came up, who reveals to be Jack Cayman, and told him "if he says he doesn't know, he doesn't know." Jack also told Nikolai that they're not in Milvallen anymore, claiming that Nikolai's out of his jurisdiction. Nikolai scanned Jack and identified him as Jack the Chaser and realized that Jack was searching for Max as well.

When Sasha, an agent of the Bureau and member of Strike One, sent Nikolai the data for Max's whereabouts, they took their leave. Jack, however, tried to stop him and say something, but Nikolai gave him a surprise attack that brought Jack to his knees. When Nikolai and Sasha left, Leo curiously looked at Jack. Suddenly, he noticed that a man by the pool table was glaring at him, but he ignored it and headed to the door until the bar-bot jumped over the table, ran to him, and flipped him off. When Leo looked back, the bar-bot quickly stood kindly and bowed to him as Leo walked away.

The Strike One encountered a group of Killseekers and they decided to split up, with Leo dealing with the Killseekers. Leo met the same man at the bar again, who was identified as a homicidal bounty hunter named Durga, who then challenged Leo to fight to see if his Cybrid Arts are all they were meant to be. After the fight, he was impressed by Leo's display, but he was not satisfied as he was with Max, calling him the "hologram man" and saying he was ten times the fighter Leo was. Durga escaped before Leo had a chance to ask him where Max was.

Leo met Nikolai, who asked Leo if he made any progress. Leo told Nikolai about a bounty hunter named Durga who might know something about Max. However, before they could do anything else, they were ambushed by more Killseekers, but they were able to fend them off. Suddenly, they heard a sound from the sewers, and they decided to head inside to see what was in their. They encountered a group of man-eating Mutants, but they managed to kill them all. They still had no clues about Max and continued their search.

While searching for clues about Max's whereabouts, Leo encountered Durga again with his partner, Garuda. He told Leo if he could beat him, he would tell everything he knew about Max. Eventually Sasha came in and helped Leo in the fight, exciting Durga who told Garuda to kill them. Leo and Sasha managed to kill Durga and Garuda, but they also lost their chances of finding any clues about Max's location. However, Nikolai contacted them and found out that Max went to Port Valenda for repairs.

As they went to Valenda, a flashback occurs, showing Leo rushing to the murder scene, where Nikolai and Sasha were already present. Leo was shocked to see that the body under the sheet was Max's wife, Ondine. Nikolai believes that Max killed her, but Leo questioned his belief, believing that Max was innocent. Nikolai explained that the wounds were the result of Cybrid Arts. After a short argument between the two, Nikolai contacted the Director of the Bureau and received orders to "shoot to kill", shocking Leo.

"Leonhardt Victorion boasts a background in the Navy's Special Operations Command unit and is currently an agent of the Strike One task force, an elite detachment of the Milvallen Ministry of Justice's Bureau of Public Safety High Crimes Division.

Honest to a fault and with a deeply ingrained sense of justice, Leo operates according to his own convictions and beliefs. As a practitioner of the BPS's Cybrid Arts, he is widely considered to be the best on the force.

Leo currently works with Nikolai and Sasha in pursuit of a fugitive - a man all thee once called their mentor." - In game profile.

Leo's combination of Muay Thai, kickboxing, and blade-augmentated combat makes him a speedy close range combatant. His moves have quick start-up times, especially his KW-H, and the first two branches of his combo can be delayed to transition into short strings which end in useful launchers, L (delay) L H and L L (delay) H. His normal charging moves are repeated swipes with pairs of Positron Claws. His KW charge move is a spinning dash with Positron Blades outstretched. He enjoys normal levels of defense and KW charging speed, and his Rampage move is a barrage of high velocity kicks. He also uses cybrid arts.

This article is a stub. You can help Anarchy Reigns Wiki by expanding it. 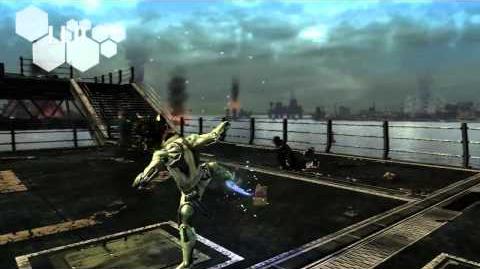 Final Concept
Add a photo to this gallery
Retrieved from "https://anarchyreigns.fandom.com/wiki/Leonhardt_%22Leo%22_Victorion?oldid=6313"
Community content is available under CC-BY-SA unless otherwise noted.