Edgar Oinkie (Known in-game as just "Oinkie") is a large chubby-looking fiend who can transform into a large green beast using a mutagen he calls "The Juice". His Mutant Form can dish out rolling strikes and slice enemies with deadly claws when in beast form. He is also a well-known junk collector and leads a gang in the game imaginatively named "Oinkie's Gang".

Oinkie appears in the White Side story, but is absent in the Black Side. Oinkie first appears in Act 2 where he confronts the BPS agent Leo in the oil drill and openly expresses his desire for Leo's cyborg body parts. After a small beat-up, Oinkie flees and lets his underlings take care of the BPS operative. Despite being outnumbered and the drill taking fire, Leo survives and pursues Oinkie. At this point Oinkie reveals his Killer Weapon and transforms into a mutant. Despite the increased strenght he gains, Leo wins again and sends the junk dealer fleeing in a comical (and impressively fast) fashion. But not before he vows to get his hands on Leo's tech someday. Even if he has to literally take a bite out of him.

Oinkie later reappears during Act 3 in Hong Long where he ambushes Leo and Nikolai. This time he brought a green Berserker Mutant, his personal pet. However, the BPS duo manages to beat his pet, his gang and finally Oinkie himself. Once again Oinkie pleads for sympathy, but his words fall on deaf ears. Nikolai then reveals that Oinkie is charged with several crimes and announces him to be under arrest. Not wanting to go to jail, Oinkie flees the scene with Nikolai right at his heels.

"As a purveyor of black-market cybernetic parts, Edgar Oinkie lives some semblance of the high life. Once a legitimate scientist, Oinkie dared to inject himself with one of his own experiments. Affectionately dubbed "The Juice.", the synthetic compound granted him the awesome physical strength of a mutant. Using his newfound powers to attack cyborgs around the city and strip them of their parts, Oinkie amassed vast sums of money fencing the stolen limbs. Putting his new cash flow to work, he expanded his sphere of influence eventually becoming the underground, de facto ruler of Port Valenda. Oinkie is the worst type of "new money" - rude, loud, uncouth, short-tempered, violent, and gluttonous. Whether or not these personality traits are side effects of The Juice is open to debate." - In game profile.Oinkie has a very obvious eating disorder, with a constant crave for bacon, and being shown to eat endless amount of it in the menu screen. He is a very cowardly and greedy character with an obsession over any cybernetic technology.

He especially obsesses over the higher grade tech such as the Bureau of Public Safety's stuff (the tech their operatives use); he's seen/heard vowing to get his hands on it and just simply wanting it. Whenever he faces odds that aren't in his favor or he feels like he's going to lose he'll simply run away.

Oinkie is a junk collector and a gang leader.

Oinkie's main ability is his power to turn in to a mutant, which can deal large amounts of damage in a short amount of time. He is also a strong close range fighter when he isn't in mutant mode, being able to roll in to enemies and crushing them. 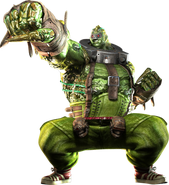 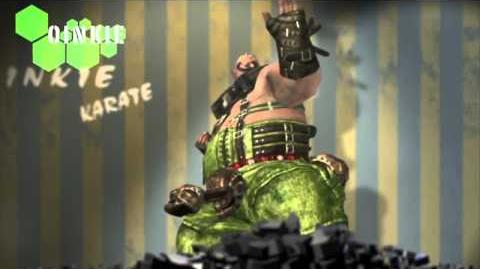 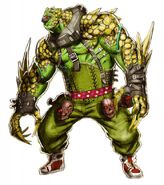 Final Design (Mutant Form)
Add a photo to this gallery
Retrieved from "https://anarchyreigns.fandom.com/wiki/Edgar_Oinkie?oldid=6346"
Community content is available under CC-BY-SA unless otherwise noted.