Welcome to the Anarchy Reigns Wiki

The wiki about Anarchy Reigns, a game developed by Platinum Games and published by Sega.
All pages can be edited and you are welcome to join us and contribute to this wiki! 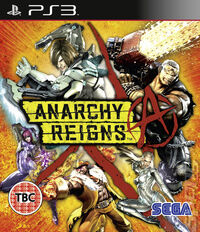 Anarchy Reigns is an online beat 'em up being developed by Platinum Games and published by Sega. The game is a multiplayer brawler set in a universe based on the one depicted in the Wii action game MadWorld. The game is being produced by Atsushi Inaba and directed by Masaki Yamanaka. After a delay, the game was set to release July 3, 2012 (NA), July 5, 2012 (AU), and July 6, 2012 (EU) on the Playstation 3 and Xbox 360, however, Sega delayed the release in NA and EU territorries in order to develop effective marketing strategies. Anarchy Reigns saw its Japanese release on July 5, 2012.