Ai Rin (藍凛) is a trained assassin who uses a pair of hooked lightning-infused nunchucks she calls Huanglong to electrocute her foes with every strike. She belongs to the Clan of the Crimson Dragon. She is the youngest sister of Fei Rin and Rin Rin.

During Jack, Nikolai, Leo and Sasha's search for Max in Hong Long Ai Rin is shown sitting with Fei Rin on one of the rooftops enjoying a quiet night with her sister. While Leo and Sasha are exploring the two Rin sisters managed to spot the two and confront them.

After a brief conversation it is quickly evident that the two sisters are against the two BPS operatives, with Fei calling them "government mechanical pig-dogs" as well as uncivil. Ai Rin and Fei Rin then strike and engage in battle with Leo and Sasha.

After the fight Fei and Ai lose but Sasha reveals that they have spared their lives and with that the two should take the opportunity to leave. Fei knows that they are no match for the two in their current state however Ai Rin, unable to take a loss, was still ready fight but before she could do so Fei takes her off by force. Leo and Sasha watch as Ai is dragged off by her older sister.

"Ai Rin is the youngest sister in a trio of sibling assassins trained since infancy. True professional in the art of death, they are considered the deadliest in their clan.

Young Ai Rin sill has a childlike air about her, squealing with girlish innocence as she cheerfully goes about her job - murder

Ai Rin employs ancient assassination techniques passed down through her clan's long history and dons a reactor-powered, nanomachine-equipped suit to boost her physical ability. She fights with transformable nunchaku known as Huanglong, or "Yellow Dragon."- In game profile.

Because she makes a very brief appearance in the story there isn't much known about Ai Rin however during her screen time it is shown that she is very confident in her abilities and gets a kick out of fighting strong opponents such as Leo and Sasha as long as she gets to kill them afterwards.

Ai is also shown to be the sort of brat that angers easily, this is first shown when Ai Rin and Fei Rin ultimately end up being outmatched by Leo and Sasha during their encounter in Hong Long. While Fei understands they have lost Ai Rin proceeds to throw tantrums and refuse to accept the fact that they have been defeated. Fei Rin had to forcibly drag Ai Rin off much to the latter's dismay. Another example of Ai Rin's anger is during her character intro on the character select screen. While playing a handheld video game she ends up losing and breaks the system in half before shouting at the player in Chinese.

Ai Rin is exceptionally quick, and relies on electrocuting her foes. She shares a similar fighting style with her sisters but her killer weapon is incredibly fast. Her element is lighting which can shock enemies and allow Ai Rin to follow up with further attacks. 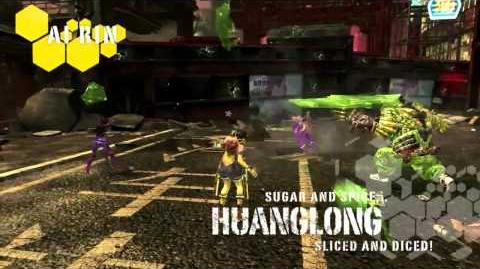 Ai Rin in the campaign

Ai and Fei meeting with Leo and Sasha in Hong Long

Ai Rin playing her game in the Asylum bar

Add a photo to this gallery
Retrieved from "https://anarchyreigns.fandom.com/wiki/Ai_Rin?oldid=6395"
Community content is available under CC-BY-SA unless otherwise noted.